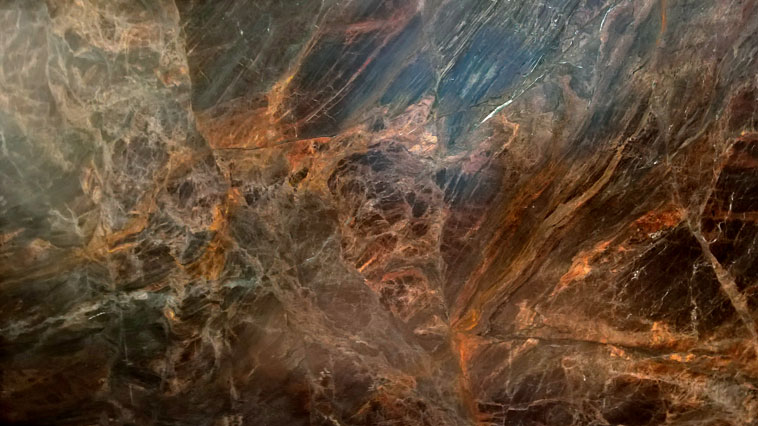 The main feature of this natural quartzite is that it possesses shades and veining that resemble another pure raw material: wood.

Both are naturally occurring. Both are born from the earth. Both must be worked to be useful in the daily life of man and woman. But if wood for furniture and architecture can also be found in Italy, our Jatoba Brown quartzite, on the other hand, can only be found in South America, in the Brazilian subsoil. And we at Galvani Trading, together with the other companies in the group, are the only ones to have it and to be able to distribute it all over the world.

We're introducing it to you, after talking about another brown material in our collection, because we believe that Jatoba Brown Quartzite has sensory properties that promote well-being.

Brown Quartzite: a natural stone out of the ordinary.

The Jatoba Brown quartzite that we present today has a peculiarity out of the ordinary and can make the difference in a world of gray and flat materials.

Quartzite claddings are the most popular on the market precisely because of the neutral colors that characterize them:

Our Jatoba Brown is a dark, uniform natural stone. It is composed primarily of quartz, a sandstone rock that was formed by the coexistence of high temperatures and intense pressures from tectonic movements. The result is a natural mix of warm tones that imprint and define the characters of Mother Earth.

There are two finishes that enhance the essence of Jatoba Brown quartzite: polishing and satin-finishing. These are processes that make the typical characters of wood appear, but on the rock. So to the touch you can perceive the raised grain, and the typical velvety feeling of wood.

You can also perceive it from these photos of processing and assembly of the DJ Cube Reception Desk protagonist of Marmomac 2019, where we exhibited marble design works of high aesthetic value. 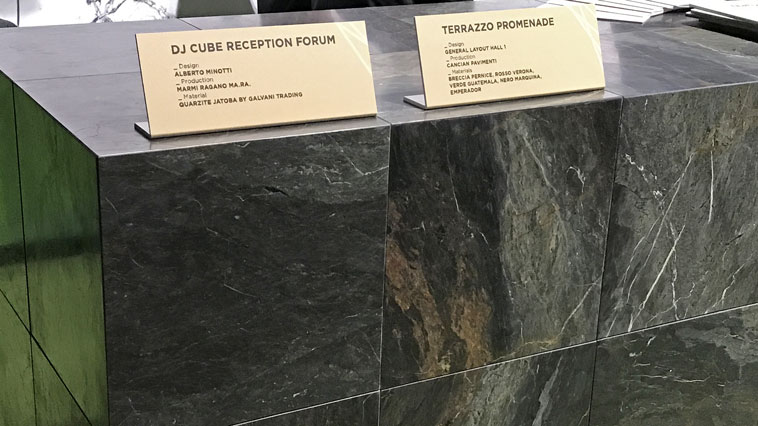 Jatoba Brown quartzite as the name implies is brown, a very dark brown tending to the absence of light. But it is also a quartzite, that is, a material that reflects light and illuminates rooms, since its appearance is that of a crystalline matter.
Quartzite is attributed the vitrified character, because on the surface seems to be laid a protective glass. Due to the strength of this perspective game, it seems a fragile and delicate material, instead:

It establishes a dialogue with the visitor's eyes, but also with the touch, since its calcareous nature is perceived by the cold contact with the material. 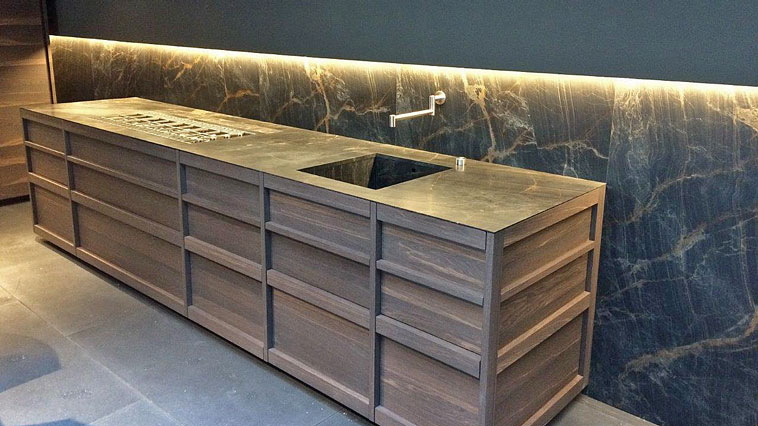 Design: Hanami di minotticucine, Alberto Minotti design.
Material: kitchen top in quartzite Jatoba Brown.
Location: London.
From this kitchen example and the photographed details you can see the grain of the Jatoba Brown quartzite, which creates a strong connection to the wood..

The use of Brazilian Jatoba Brown quartzite creates striking immersive perspective panoramas.
Why immersive?
Because the fine traces etched into the quartzite hypnotize the viewer. Like a visual net they transport him inside the stone to discover a living, immortal and solid environment.

Do you think we are exaggerating?
Look at the picture of the material.

Focus only on the image. Observe the colors that follow one another, alternate and mix. Follow the fine lines that run throughout the material. Don't you think it represents the extension of Mother Earth? And it can be right at home, in the rooms of a luxury boutique hotel or on the floor of a high fashion store. 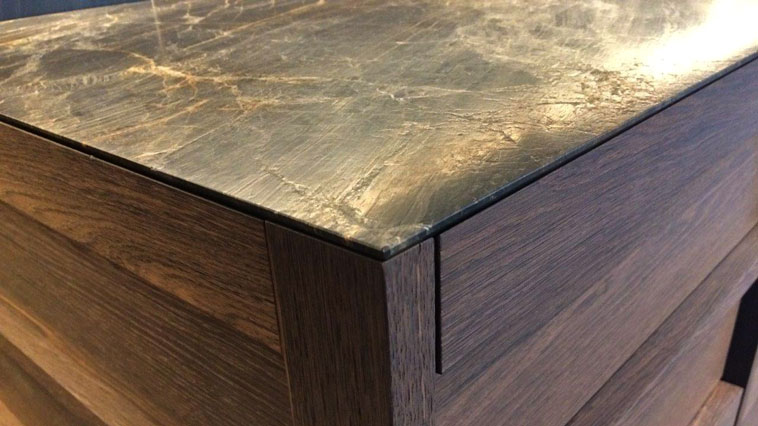 Brown Quartzite: a solution for a renewed philosophy of furnishing.

The uniform and linear chromatic mood allows to create interior and exterior scenarios of sublime prestige. The present linear element connects the furnishing elements with which it comes into contact: jewelry, paintings, table centerpieces, vases, lamps that rise from the floor.

The veins, present on this brown quartzite, unite and enhance the profiles of the matching and juxtaposed furnishing elements. Just as the thread of a haute couture fabric holds several elements together in a single garment, so does the trace impressed on the Jatoba Brown quartzite create sinuous silhouettes that establish a continuum of physical communication between coverings and furnishings, between content and container, between reality and fantasy.

The light, which accentuates the shades of brown and the vitrified effect, creates reflections and plays of depth that give greater breath to the places and rooms in which Jatoba Brown lives.

The most important value for future constructions will be to create harmonious environments between inhabitants, furniture, objects, surrounding area and climate. We at Galvani Trading will continue to repeat it, because we strongly believe in it: the use of natural materials, such as quartzite, will improve the psychophysical well-being of men and women. And no material that will recreate the effect of stone, can replace the emotions, feelings and beauty of what Mother Nature has preserved and modeled for so many years.

Get in touch with us to learn more about the natural materials that you can use in your architectural or interior design projects.

Click here to learn about the technical characteristics of the material Jatoba Brown.

E-mail us,
for our availability and prices.
info@galvanitrading.com

Fill the form,
for a speedy response

Discover all our materials by browsing this free catalog.